In the last month ISM has joined up with Jordan Valley Solidarity and a slew of other international activists to make mud bricks for a new house and football field in the small Bedouin village of Fasayil, in the Jordan Valley. Fasayil is made up of many scattered islets of Bedouin homes, animal pens and makeshift structures, spread out over a swath of desert. In the daytime, children run around in the stifling heat yelling at each other; men walk around in short sleeves busy with the day’s tasks, or sit in the shade together talking and staring off toward the mountains; women, wrapped in shawls, peek out of their houses briefly to walk across the encampments, and can sometimes be seen sitting on their porches, but otherwise seem embarrassed to appear before the eyes of Westerners (and pretty much anyone, given the conservative social structure here). There are many scattered encampments, of five or six houses each, that gradually lead up to the center of the village, where the structures are more permanent, and there is a little shop that sells cold cans of Coke, warm pita, and all the other amenities.

Right now, though the Jordan Valley is one of the regions of the West Bank hardest hit by the Occupation, Jordan Valley Solidarity is one of the only NGOs working on the ground. This is because, in Israel’s tripartite structure of apartheid, most of the Jordan Valley falls under Area C zoning regulations, where it is under full Israeli military and civil control as a ‘closed military zone’. This means, among other things, that it is illegal for the Palestinians, most of whom are Bedouin, to build any permanent structures without a permit, which is almost impossible to obtain. Therefore, most NGOs will not work in the Jordan Valley, not so much because any structure they build will be demolished (which is largely true), but because building is illegal in the first place.

Fasayil is a unique example because the center of town falls under Area B regulations- Israeli military control, but Palestinian civil control- while the outskirts of town are completely Area C. The structures at the center of Fasayil are larger and more permanent, therefore, because, due to zoning laws, this is the only part of town that is not regularly demolished. After demolitions in Fasayil 2 months ago, 134 people, including 64 children, were left sitting under the blazing sun, surrounded by their possessions, with nowhere to go.

Because the land is designated as an Area C Closed Military Zone, the Bedouin, who have either lived semi-nomadic lives in the region for centuries or who have moved there as refugees after 1948, not only are not allowed to build structures of any significant permanency, but they also cannot dig water wells of any significant depth, and because of Israeli military checkpoints and road closures they can scarcely export goods of any significant quantity or quality. The not-yet-published Jordan Valley Solidarity factbook ‘To Exist is To Resist’ describes the difference between the two areas in Fasayil-

“Because it is nearly impossible for Palestinians to obtain construction permits in Area C, the difference between the two sides of town is stark. Indeed, when crossing from Area B to C the demarcation is not a checkpoint or a sign, but rather the end of paved roads and the drastic change from houses to shacks. Animal shelters mix with residences, electricity is scarce and water must be bought and brought in at exorbitant prices from Israeli companies.”

The web site of PEDAL (www.100daystopalestine.org), one of the international groups that work with us here, gives a great summary of the history of the Valley-

“After the 1948 Nakba (when over 700,000 Palestinians were expelled) many refugees arrived here and in 1967, in a deal between Jordan and Israe,l they had their refugee status revoked in exchange for small plots of land. Following this, many inhabited refugee camps were demolished while the UN turned a blind eye. Since 1967 Israel has taken nearly all the remaining land, leaving just 5% Palestinian (area a+b) consisting of Jericho and 5 villages: Lower Fasaiel, Bardala, Al Uja, Zubeidat, and Ein Al Beida. The rest of the valley (95%) is now area c and subject to military control. Of the 320,000 Palestinians that lived in the valley before 1967 only 56,000 remain (75% of which live in Jericho), the rest have been displaced.”

The stated purpose of Israel’s vise-like grip on ownership and control of the Valley is to hold a security buffer space between Israel and Jordan, necessary to defend the country; in reality, however, Israel covets the Valley because (1) the West Bank, which could serve as a future Palestinian state, is thereby surrounded on all sides by Israel; (2) the West Bank is thereby cut off from economic interaction and communication with Jordan, and the rest of the Middle East; and (3) in the words of Jordan Valley Solidarity, the Jordan Valley’s “abundance of water resources, fertile soil and natural minerals offer competitive economic advantages in agriculture, industry and tourism. It also constitutes a geographical “reservoir” of land where the Palestinians could establish housing projects and public facilities.”

Every day, at about five in the afternoon, after a long day of sitting around eating pita with hummus and talking politics (or hitch-hiking to Jericho), the internationals (usually anywhere from twelve to five of us, depending on the day) walk out to the desert beside the village to begin work. At this time, the sun has sunk down to touch the top of the mountains, it is no longer unbearably hot outside, and a strong breeze begins to kick up through the valley, sweeping sand up in its path, as the hot air rises and cool air rushes in to fill the vacuum underneath. As we walk in between the houses and animal pens of Area C Fasayil, mothers smile at us from their windows, children look up into our eyes and look away, fathers nod their heads and say ‘salaam aleikum’, the smell of Ramadan break-fast wafts out of open doors, donkeys stand and neigh, goats shift their feet, dogs bask in the afternoon heat; the enchantment of this beautiful community mingles with the haunting recognition that each of these structures has received final demolition orders, and thus could be bulldozed to the ground at any time. This entire village could disappear from existence in the blink of an eye, at 6 in the morning, with the Bedouin families standing beside the rubble of their homes screaming and sobbing, and international activists arriving just in time to offer their condolences, take pictures, and write a report for the news media.

At the site of work, a water tank drives up to the large pit we dug in the earth; somebody turns the faucet, and water pours out into the pit, mixing with the sand to create a thick, wet mud. Excitedly we pull up our trousers, dig our feet into the mud and begin working the sand in with the water, spreading the mixture evenly to make a consistent mushy, gooey mud which envelops everything it touches. Five mud-caked, wide-eyed, primarily European 20-somethings dancing around in the mud, surrounded by ten or so Palestinian shebab (young men) looking amused, is certainly a sight to see! We dump a bag full of ‘kash’ (straw) into the mix, and once that becomes suffused throughout the goop it is proper mud, perfect to make bricks. Some of us scoop the stuff into buckets, others carry the buckets to the third group, who stand hunched over in a line, shaping the mud into bricks, and leaving the mud bricks out to dry.

Recently, the IDF has begun to crack down on our activities. In the words of an international, who would prefer to go by the name Francis Taylor,  “the soldiers came every night the last five nights. The first night they just asked us what we were doing, the second night they said ‘you know you’re building illegal houses and you could be arrested today or tomorrow’. The third night we anticipated them coming, and we left before they raided the site. When they came they stole the tools and destroyed the equipment and smashed the bricks. Since then we have made new tools and are working harder.”

We work into the night, taking various tea and hookah breaks, and then come 11 p.m. we stumble back to our single collective room, with weary bones and muddy skin, and sit down to an amazing meal, cooked by a Bedouin woman behind the closed doors of her home and served to us by her husband, who gets all the thanks. 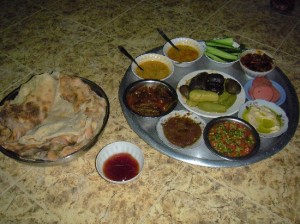 Here is the brief article about our project, on the Jordan Valley Solidarity website-

Welcome to Doikayt! This blog is about: radical Torah; fighting fascism and racism in the US; the Israel/Palestine conflict; Jewish history and identity; Yiddishkeit, and more.

The word ‘doikayt’, meaning ‘hereness’ in Yiddish, was the slogan of East-European Jewish socialists- we must struggle, with feet firmly planted where we stand, for the liberation of ourselves and all other people.

חזק חזק ונתחזק- Be strong, be strong, and may we strengthen one another!

My name is Ben Lorber and I’m a writer, organizer, musician and radical Jew. Here mostly to smash fascism, raise the sparks, sing and bring Moshiach.
I make weird folksy music as Narrow Bridge- check out my Bandcamp! I live with my lovely partner and two cuddly cats in Chicago, Illinois.
This blog is where I put my political diatribes, philosophical musings, spiritual ponderings, and reflections on Jewish identity, history and more. It also houses occasional guest posts from comrades and chaverim.